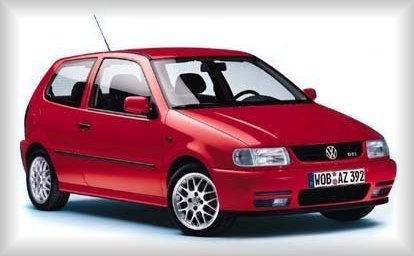 Welcome to UK-Polos, and more specifically, the Mk4 forum section.

This guide was created to answer the most common questions we get asked by new members about the Mk4 and also as a reference point to existing members.

The car was available with 1.0, 1.4, 1.6, 8-valve petrol engines, and a '16v' model, based on the 1.4 but with, you guessed it, 16 valves. Two diesel engines were available too, both 1.9 8-valve lumps, known as the 1.9 D and the 1.9 SDI. The SDI indicates the direct injection of the diesel fuel into the cylinders, but without the aid of forced induction. The older 'D' model did not have direct injection, and therefor it was marginally quieter and less fuel-efficient.

1998 saw the introduction of the 1.6 16v that was later used in the Lupo GTI and the Mk5 GTI. The Mk4 GTI (shown above) wasn't available in the UK, unfortunately. Power output and all engine codes on the Mk4's and Mk5's can be found in this Excel sheet.

The most common version of the Mk4 Polo is the three door model. The 5 door model was available, as was the stationwagen (known as Variant in Gerrmany) and a sedan (known as Classic) made the lineup complete. Both these versions (stationwagen and sedan) were based on a modified Polo platform, also used for the SEAT Ibiza and Cordoba. The modified platform is known as the '6KV' code. Underneath, these cars are somewhat different and you'll find that parts are not identical. Examples include different engines, different ways of mounting the engines, and different bodyparts.

The Caddy was also based on the 6KV platform:

The regular Polo model was available with a range of options, and it saw the introduction of front airbags, ABS, and airconditioning. Power windows, mirrors and central locking doors were appealing options too. Special editions also brightened up the Polo pallette, such as the Open Air model, that featured a folding cloth roof:

...and the Colour Concept model, that featured the distinctive BBS Solitude whees, and full leather Recaro seats, matching the colour of the exterior of the car:

One of the more odd creations of VW was the Polo Harlequin, limited to 1000 cars. The panels were swapped around using 4 basic colours, being Chagall Blue, Ginster Yellow, Pistache Green, and Flash Red:

The Colour Concept and Harlequin ideas were used on the Mk3 Golf as well.

We will start by listing the most common mods, and links to DIY guides.
We will then talk about more involved mods, such as wheels and suspension.

The 'Polo' badge is glued in place, and leaves no holes in the bodywork if removed. Use Mole's guide to remove the badge to clean up the rear of the car.

The Mk4 rubstrips are, again, glued on. This means they come off much the same way the rear badge does. Keep in mind that there could be some difference in color due to the influence of the sun. There are no holes behind the rubstrips. This is NOT the case for the facelifted Mk5 - beware.

The useless grab handle on the driver's side can be exchanged for an original Volkswagen sunglassesholder. It will take 5 minutes to fit - read how here.Thanks go to Christian for taking and hosting the pic.

Straightforward, good result. Read how here. Will also describe removal of the original knob if you're after something aftermarket.

Elaborate, no-going back mod, but so worth it. Here's how it looks:

Read how to fit it, here.

A cheap and easy mod that really tidys up the front of the car, see how to do it here

Smaller, wide wheels are popular too. For instance, 195-45-14 looks small and wide, but if the car is lowered enough, it has that cool rollerskate look to it. Keep an eye on the ET though, even small wheels rub if they're poking out enough.

The base Mk4 came with oil filled shocks, while the 16v and GTI were blessed with uprated gas filled shocks and slightly shorter springs. Still, Polo's look like they're afraid of the pavement, so lowering the car will improve the look of your motor tremendously.

As with most mods, buying cheap means buying twice. With suspension mods especially, you get what you pay for. My advice: do it right the first time. There are several options to meet your budget.

1. Replacing the springs. If you buy shorter springs the car will sit lower. Fair enough, but the standard shocks you're using are not meant to work with the shorter springs. Hence, the maximum ammount of lowering is limited to 30 - 40 mm. Even then, the shocks will not last as long as they would otherwise, and the ride and handling may be poor.

2. Replacing the springs and shocks. If you get a kit that has the shocks matched to the springs, you'll be getting a significant improvement over the first option. The dampers will be able to cope with the shorter springs, and, since they're uprated, will handle better than the stock shocks. Drop can be anywhere from 30 - 60 mm.

3. Getting coilovers. A must have for show cars, or true tarmac fetishists. I'll try to explain these. Okay, you've seen regular springs and shock absorbers, right? They're completely seperate and you can replace the springs with shorter ones if you wish. That's about all you can do to adjust the height of the car.

Now for coilovers, they are springs and shocks too, but the springs are much more compactly rolled around the shock. Also, they come fully assembeld whereas regular shocks and springs need assembling. The real benefit of coilovers, however, is in their adjustablility: With regular McPherson shock absorbers, the spring seat at the lower part of the shock is fixed in place. On coilovers, the spring seat is not static, but, using a hook like tool, you can turn the seat so it sits higher or lower. This in turn, makes the spring sit higher or lower, which makes the car higher or lower. They are most known for being able to go really low (up to -140 mm on some cars), by the way.

There are a few more interesting things about them, but the above is the real 'killer app': To be able to adjust the height of the car manually. Something that's impossible with traditional McPherson struts. Porsche uses this type of suspension on all its models btw.

For reference' sake, look at the pic below:

That's how they look.

Below are regular springs and shocks, you can easily spot the difference:

The 6n now has quite an extensive range of styling programs, most are subtle additions but there are quite a few more extreme ones.